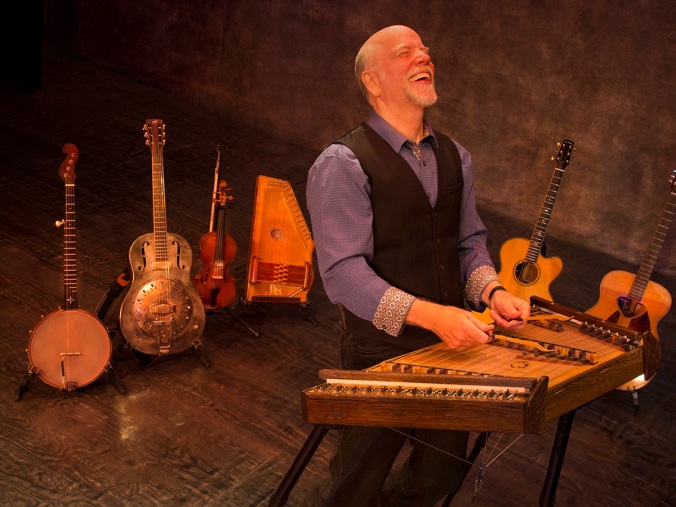 John McCutcheon’s entrance to becoming a professional musician started humbly in 1972 when he convinced his professors at St. John’s University – College of Minnesota (fellow student Garrison Keillor was a DJ on the campus station) that he should take a three month independent study to travel around the Appalachians and meet banjo players.  He didn’t intend to learn about tobacco farming or strip mining or little organizations, or the Baptist church, but he couldn’t learn about the music without learning about the community. Thus were the seeds planted for John in both folk music and grass roots community organizing.

The journey of over 40 years as a recording and live performer have allowed John to release 37 albums to date and along the way he has picked up numerous media accolades as well as several Grammy nominations.  The late Johnny Cash called him “The most impressive instrumentalist I’ve ever heard” and the late Pete Seeger said “John McCutcheon is not only one of the best musicians in the USA, but also a great singer, songwriter, and song leader. And not just incidentally, he is committed to helping hard-working people everywhere to organize and push this world in a better direction.” John’s books and instructional materials have introduced budding players to the joys of their own musicality. His commitment to grass roots political organizations has put him on the front lines of many of the issues important to communities and workers.

John McCutcheon live performances are a delight for both the audience and the performer. John is blessed to absolutely love his work and his passion shines when he takes stage. His connection with his audience is unrivalled and he is continually finding new things to write and speak about, based on his travels and observations. Seeing a person who is truly following his calling in life and sharing that joy with others is a magical thing.

The mark of a great artist is one who takes his art seriously, himself, not so much.